“Something that has always puzzled me all my life is why, when I am in special need of help, the good deed is usually done by somebody on whom I have no claim.”   William Feather

Kidding with the Durham NH firefighters rescued me from what might have been a late afternoon slump at the Seacoast Home Show at UNH though I was pulled away often by people who actually came to our booth looking for product information and giveaways, rather than potential fire hazards.

“Have you ever rescued a cat stuck in a tree or is that entirely cliché?”  As an animal advocate, and obsessive pet companion, I was leading up to my real question.

“Cats like to be in trees, they are not stuck; put a can of food at the base and you’ll get your cat back when it decides to come down.”

“I have two 10lb free range rabbits, one bites, the other is mostly blind.  I

really need to know, if my house was burning would you read the notice on the door that says my rabbits are on the top floor and look for them?”

“Yes.”  The comedic ring-leader added, but the answer was qualified; the first priority is always humans.

“Have you ever rescued any animals?”  This might seem like an easy question, but when you’re speaking with very humble, very cute (okay cute had nothing to do with their answers, but did you ever notice that everyone that works in a fire station is good-looking and charming.  Every single one, male or female, including dispatchers and EMTs has amazing appeal. And I’d like to know whether they, like Chippendale dancers, have a prerequisite of supplying a photo with an application or whether the lingering scent of smoke triggers pheromones, but as a happily married woman, that was not a question I was comfortable asking.)  I digress, and do so knowingly. I also wondered if there is any occupation that is more admired than emergency responders. It goes beyond looks.  I checked out five polls from Forbes.com to askmen.com, and found that firefighters typically rank in the top three of respected professions.  I am not alone in my admiration.

Back to the animals, the members of this platoon were initially  reticent to speak of personal heroics, and weren’t looking for a pat on the back.  They didn’t even want to be identified in the blog, so it took some persistence to get the stories flowing.  Dog rescues are fairly common but one story stood out.  This single-minded dog swam to a buoy that was secured and decided he just had to have it, and it was the only thing in the world that mattered.  The buoy rope was stronger than the dog, but the dog had high hopes and was sure that with just a little more “can do” spirit he would get it, so he persisted.  Then he started to tire but his pursuit was relentless.  The owners stopped finding it amusing and worried about his safety.  Who do you call when your dog is a dope with a rope – why the fire department of course.  And without laughing at owner or dog (at least until  all were safe), the firefighters masterminded a tail-wagging ending.

Another guy rescued a recalcitrant cow that would have become a flood victim. Sometimes cows just won’t listen to reason, even when you’re trying to save their lives.   Now that probably isn’t something he trained for, but calling the fire department has become the cure-all for many of life’s mishaps, and these guys from Durham welcome the opportunity to help out and in exchange get to work out solutions for all sorts of strange stuff. Durham’s website  http://ci.durham.nh.us/DEPARTMENTS/fire_dept/operations.html encourages calls with the following quote:

“The shifts respond to an average of six calls per day. These calls include requests for medical aid, fire suppression, and service calls. Whenever a customer calls, we will do everything possible to help with their situation. If you have a problem, call us; we may have the inside track to the solution.”

During a parakeet story, I was pulled away to answer some product questions.  But I know that when a pet is released into the wild, it isn’t returning to nature, it is being sentenced to a cruel death.  (This is especially true of my rabbit friends. They are NOT even the same creature as a cottontail; they are a different genus with a different number of chromosomes.) I also know that a bird, unlike a cat, doesn’t possess the tools to remember how cozy it was back in the house, so this was a rescue worth scaling a tree.  How calming 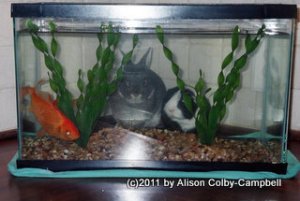 this man must have been to earn the trust of a bird overwhelmed by the wild.

Then the ring-leader told me his rescue story.  It might have seemed small by most people’s estimates, and overlooked by many others, but he and a partner found a soot-coated glass tank and had the presence of mind to wipe the soot off, to peer inside. Without being told of its existence they found the family goldfish.  It was alive and transported to safety.  Stunned people watching their possessions go up in flames, don’t regularly understand all the thought that goes into stopping the fire and rescuing the inhabitants, for that matter most people on the street don’t understand it either. But this one story made me aware that even in a fast-paced crisis, the firefighters pay attention to the littlest details, and our smallest friends, and that knowledge will help me sleep better at night.

Break time was up, and the ringleader slapped me on the back with a junior firefighter sticker that he may have intended as a joke, but, true to form I was completely charmed.  I haven’t been called a “junior” anything in a long time.  Thanks, guys.

3 thoughts on “Somebody Call 911 – Shawty Fire Burning On the Dance Floor and other odd reasons people call the Fire Dept.”