“If a rabbit defined intelligence the way man does, then the most intelligent animal would be a rabbit, followed by the animal most willing to obey the commands of a rabbit.” ~Robert Brault, www.robertbrault.com

The person who started me thinking differently about animal welfare is

Dr. Temple Grandin, the brilliant, autistic author (and one of Time Magazine’s 2010 Top 100 Influencers) who spent decades researching the causes and hopeful relief of distress in animals and consulted for companies as seemingly incongruent as the McDonalds Corp. and Swift Foods. Through her books:  Animals in Translation and Animals Make Us Human, I may not have received all the answers I sought, but they sure gave me a whole new set of questions to use to establish the framework for making decisions for living respectfully with animals. http://templegrandin.com.

out of the animal kingdom concerned a group of people fighting to end the euthanasia of healthy albeit older work horses that had outlived their usefulness to owners.  The well-meaning group, I am sure, envisioned horses in their senior years romping freely in an idyllic pasture fragrant with sweet clover, warmed by an always present, not too hot sun, beside a babbling pure creek.  A retirement home akin to the best we have for our human seniors with a variety of entertaining acappella groups and optional daytrips to Monhegan Sun for the chance to win (then will) millions on penny slots.

The reality of their legislative win exposed the bitter mistake.  Older horses sold to Mexico by owners who could not practically, or did not want to,

pay for the dream, but were not allowed to euthanize.  The horses saved from the cruelty of euthanasia spent their last years brutally beaten and literally worked to death in a country with lax animal rights laws.  Were they better off euthanized?  Let’s face it, the horse will never know you saved its life; it will only know it’s being beaten.  So it’s very difficult to make that call for a non-verbal species.  But the situation pointed out that something other than those two choices needed to be added. That story also inspired the mantra I recite throughout the day when minor calamities (not my fault, of course) befall our household, followed by the most irritating of excuses “I didn’t mean for it to happen.”  My mantra  “Think the next step ahead.  Seemingly random disasters are not always unpredictable.”

So where is this story taking me?  I went to the Franklin Park Zoo in Boston this week.

Zoos are not a favorite of mine, nor as we learned in 2003 of Little Joe, the gorilla that escaped twice, in two months, before the entire gorilla setting became the gorilla “enclosure”.  http://www.boston.com/news/local/massachusetts/articles/2003/09/29/franklin_park_gorilla_escapes_attacks_2/  So, of course I “anthropormorphized” and decided, he just wanted his freedom, he was after all a young male gorilla, and, well, we all know how adolescent boys are.  And I remember I became incensed thinking this gorilla might “need” to be put down because people had captured it and put it on display, and then were shocked when it “acted out”.  Not his fault; save the gorilla; cage the people.

This week, the zoo messed with my brain, too, Little Joe.  I was torn mostly

between “why can’t I can’t get close enough to see that animal” and sadness; these animals are living the life of well-kept, no, better make that well-stabilized, slaves expected to perform for their keep.  They gave up their liberty for  security, but it wasn’t their choice.

On the positive side, I read signs placed about the compound that said that certain animals in captivity more than double their life span than if they lived in the wild.  I saw references to the care provided by acclaimed MSPCA Angell Memorial.  I read that many of these were rescued animals.  According to National Geographic, which appears to be the source for the zoo-posted fact, there are 5000 tigers in US private homes; that number is more than the number of tigers left in the 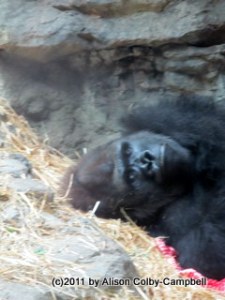 Does a long-lived wild animal in captivity, constitute a better off animal than one at risk for violence and disease in the wild? Is a live horse abused in Mexico better off than a dead horse in the US?  Does the fact that people are more willing to support wildlife, if they’ve had firsthand experience seeing it, justify zoos?  No good answers that fit all circumstances.  What is fair?        What is right?

I wanted to see Little Joe, don’t know if I did, but I viewed so many gorillas behind the safety of the glass and made more distant through my camera lens.

Looking at something for a photo objectifies it, and allows one to contemplate only the merits and the possibility of the shot.  But one window was covered with hand prints – human or ape or some combination, so I couldn’t photograph and I just watched….one, a mom tenderly nursing her young, and another trying for a mid afternoon nap, and staring (at me? I doubt it), just staring and that made me wonder how I would like to try to sleep with a pack of strangers tapping glass and shooting cameras at me?  I know I would hate it even if I learned to get used to it.  Even more I would hate to have a gorilla stare at me when I slept; so is there any reason to think a gorilla would be more accepting of that situation in reverse?  I don’t even want a human staring at me when I sleep.

Letting my mind breathe for a while, I looked for a video to send as a “birthday” card for a friend and I came upon the “Wolf Man”. Some self-promoting 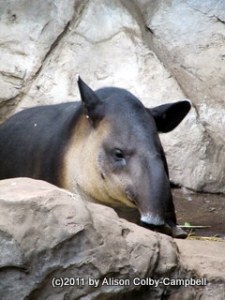 dude (Shaun Ellis) with a Nat Geo “documentary”  http://natgeotv.com/uk/the-wolfman/about  who thinks he’s been accepted as a teacher in a pack of wolves because he lives with them, eats carcasses with them (he stashes cooked bits for himself within the remains.) and licks the muzzles of the pack.  I doubt this constitutes pack acceptance.  I think of him more as a wolf’s equivalent of a fine wine, they’re just keeping him around for a special occasion. made along the way.  And while they may be regrettable, I have to think some action that requires thought and focus about what might be best is better than none, even if the action only points out the errors of our naïve original thinking.  Still no answers, just a pack of questions.

5 thoughts on “Zoo Animals Staring Back”