“Every thought is a seed. If you plant crab apples, don’t count on harvesting Golden Delicious.”  attributed to Bill Meyer

This blog was originally intended to discuss the subtle variations and preferences in apples available throughout New England.  But when I got back and realized even with labels I started to doubt my memory on the types of apples contained in the pics, I realized I was lucky to be annoyed by what I call “the antics in the orchards”.

Trust me, eating the apple in Eden isn’t the only apple-based crime. After a recent trip to three orchards, I witnessed a need for a course on Apple Picking Etiquette. I figured this out after finding myself insulted by a number of accusatory signs posted throughout Cider Hill Farm in Amesbury, Smolak Farm in North Andover and even my beloved Barkers Farm also in North Andover.

Any marketer would tell you “Don’t accost your potential customers with “No shoes, no shirt, no service”-like admonishments even before they

enter your store when in fact you are trying to sell them something, and the VAST majority of people have no intention of coming in shirtless and shoeless”.  I was immediately put off by this practice on PYO farms.  But my experience in the orchard and in speaking with proprietors made me realize that people are more horribly mannered than I had naively believed, and the signs are needed. 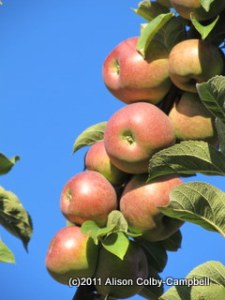 Golden Delicious” and so never passed that info on to their offspring, and that through this newly educated generation of parents, we will eliminate the need for cranky-spirited signs on the idyllic landscape of PYO orchards and farms.  And for those who can’t find it in their hearts to help the farmers because it’s the right thing to do, I also present a list of legal ramifications you may encounter if you go astray.  These were reviewed lightheartedly by Atty. Walter R. Colby, my dad, who is still practicing law in Wakefield, Massachusetts,  as well as by anonymous proprietors of PYO farms throughout the region.

AND, A BIT OF ADVICE FOR FARMS

Then, very visibly identify the tree and apple types.

ADDED BONUS FOR READING TO THE END:  the best apple in the world is Macoun.