It was my birthday. We had other plans but as we left the small country airport cafe in Limington, Maine, I couldn’t stop thinking of the junk yard, salvage, antique place we passed earlier. “It was just a few minutes back, couldn’t we back track for just the shortest time? I’d like to take some pictures there.” Basically all I remembered of the place we drove by as quickly as a country road allowed was a rusty truck and canoes. But that was enough to hint at wonders yet to be seen.

My husband was hesitant, so I pulled out that trump card that is neither democrat nor republican….. “but it’s my birthday”. And back we headed on winding country roads with peak speeds of 35 mph or so. We rode quietly for more than the five promised minutes from Limington to North Limington to Buxton to North Hollis to Center Hollis. We traveled about a half an hour and then there it was. My husband grasped at the message at the gate that read ‘closed’ yet was swung open.  He was ready to u-turn back to our original plans, that mostly included a scenic 2 hour drive through small country villages. I protested that the open gate meant they were in fact open, so we parked along the highway and walked in.  It was 4 acres of magic, or more aptly, spells waiting to be cast on lovers of history and old stuff and fascinating stories of celebrity encounters and prized purchases. 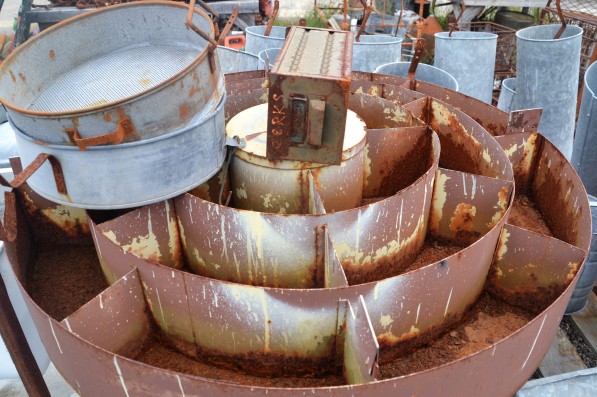 It was more expansive than I thought, and I immediately loved the old bikes, the hand crafted boxes made of recycled wood. My camera that I pointed in the direction of that rusty truck that caught my eye, moved like a divining rod to this treasure and that.

A lanky good looking man came from behind some stuff somewhere and asked how he could help. He was the Pete of Pete’s Place. With every interest I expressed he had an accompanying story, and the fact that it was my birthday meant that I could get the best deal of the day, because his birthday was just the other day, too. A couple of Virgos will challenge each other with facts and stories for hours on end and I worried that my time was limited. My husband would be tapping his foot in the car, fretting about the shift of plans that must be righted. ‘Best Deal on what?” I asked and he asked “what do you want?”

Within my range of vision I saw only a fraction of the land and the 18 wheeler sized containers that hid more mysteries than I could contemplate. “I cannot tell until I look.” He mentioned he’d spent decades at Brimfield (Mass) Flea Market, the nation’s largest 3x yearly extravaganza. I said my favorite show was #FleaMarketFlip and the contestants often shop at Brimfield to find treasures to repurpose and resell in New York. Had he ever seen Lara Spencer, the host? Why yes he had; they set up their shots in the field where his temporary shop was located. Did I know she just got remarried? I did not, but I always wondered if she’d trained as a dancer since her feet were always in a modified first position when she interviewed the contestants. That he did not know, nor had he noticed. I must shop and shoot, I thought but I asked if he’d had other brushes with fame. He had; other antiques based tv shows had scouted his location, movies had sought him out for set pieces, as had plays. 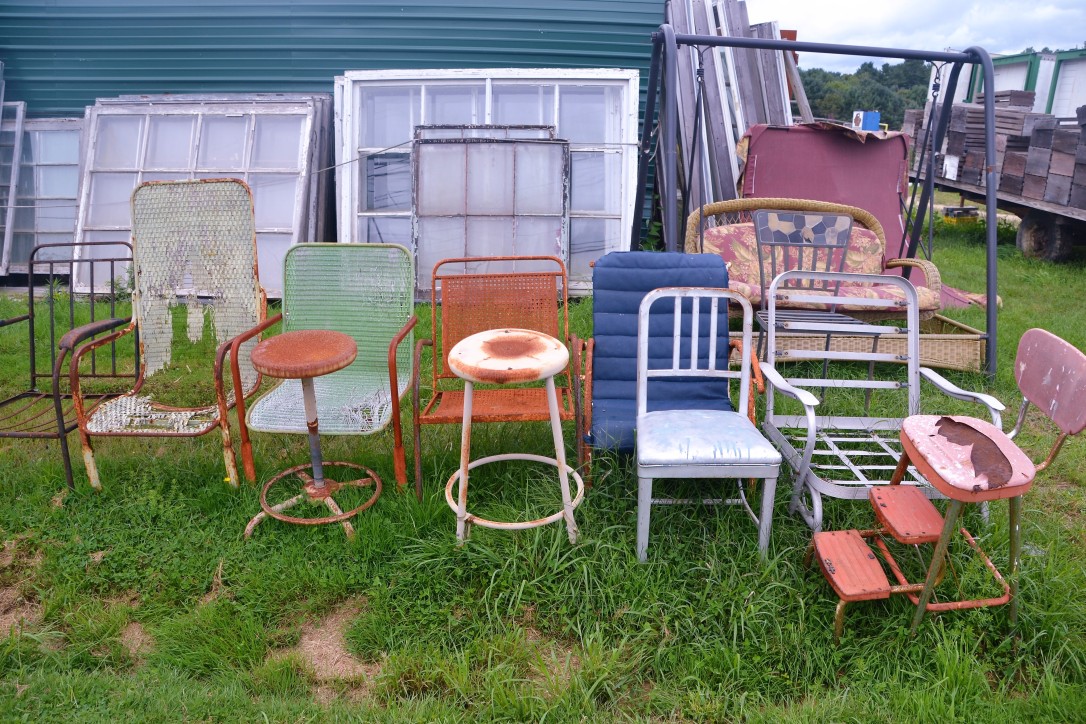 My husband arrived behind us and I left the two talking as I swiftly passed from aisle to aisle. I’d made a preliminary loop and edged toward the car to see if my husband was waiting there impatiently. He was not. In fact I could hear him and Pete talking, his booming voice bouncing off every type of material. My husband thought of his son-in-law and asked if there was any fire department equipment on site. Pete walked him immediately toward a single piece among millions where a specialized hose rested. That was not the piece my husband was looking for. Pete said, “well then I have some others in the black 18 wheeler with the silver trim but that’s padlocked, let me walk you there.” And off they went, with me tagging along this time. Jon walked into the truck where I glimpsed a ride-upon train and several pieces of fire dept apparatus and a twiggy bird’s nest built on the shelf just above it.

Pete and I stayed outside to talk. I told him I collect old typewriters and cameras and he said, “I’ll take you over to the typewriter department” as if we were in a well delineated department store. I laughed. He didn’t. Across three aisles and down 2/3s of the way, there it was –  the typewriter department. Not the type I collect, but now I was fascinated that this man may actually know where every single piece is placed on the four acres of stuff he’s been collecting for 45 years. What superhuman powers does he possess and who collects all this stuff, and whose better half would share the same obsession. Obviously his did not. He is no longer married. He spoke of rude photographers who came by to shoot engagement photos without talking to him first. My Catholic guilt kicked in, was my rudeness erased when I really came for the photos but fell in love with the ‘collection’? 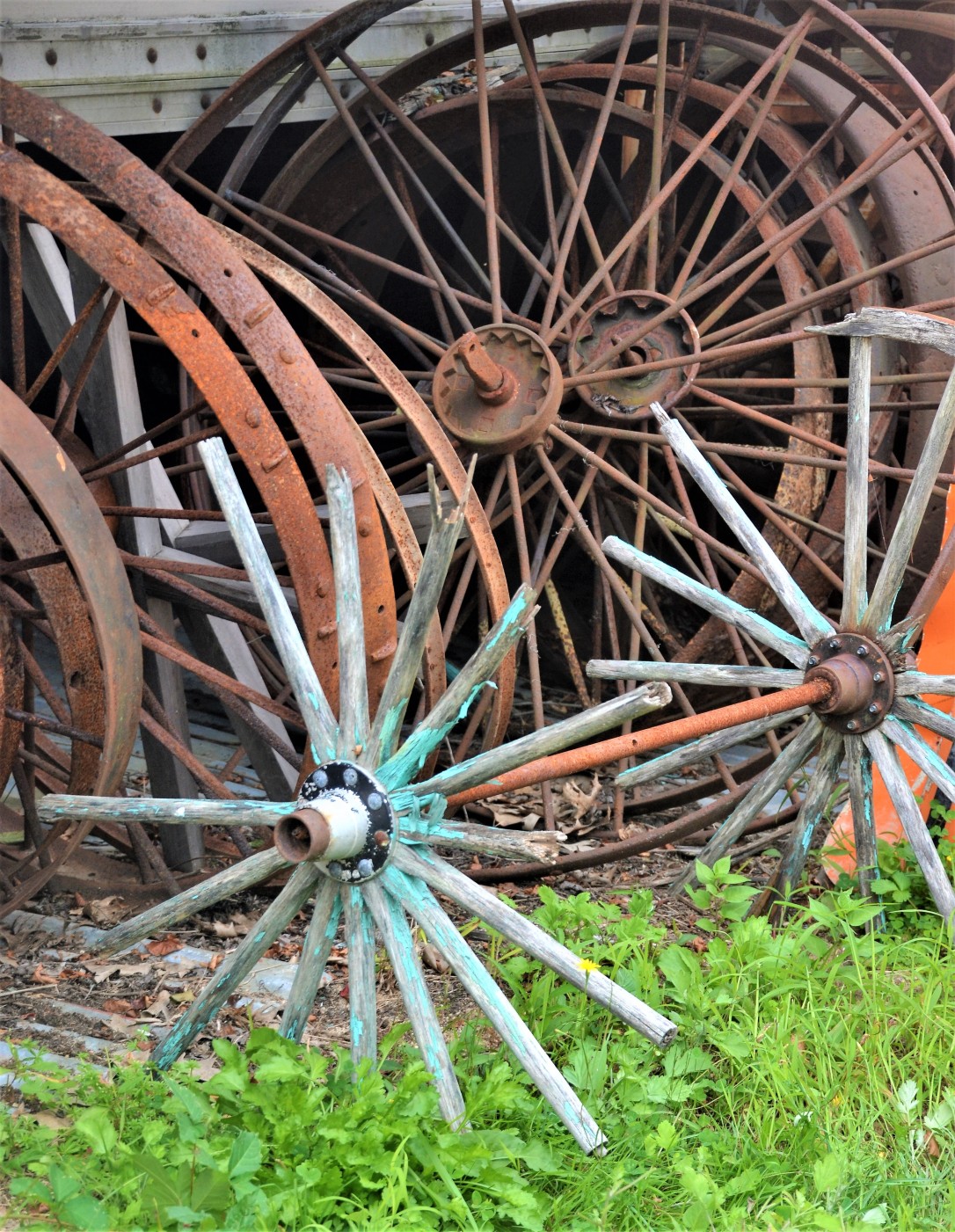 He told me a tale of a reserved piece that never got picked up. It was a big treasure, an 18 foot, four panel, mechanized diorama supporting the old style belief that we would be a generally healthier and wealthier population if we merely consumed more milk. The price $24,000. I replied “I’m gonna be up straight with you; I’d like to see it but I don’t have $2,400.” He said “you didn’t hear me; it’s $24,000”. I said, “you didn’t hear me; I don’t have $2,400 to spend.” We walked to a well concealed and locked up truck. I am neither small nor comfortable in small enclosed places, and this over packed trailer was a thing of nightmares for me, but I needed to see his prized possession. Obscured by other stuff that promised to reach out and touch me in the dark was this extraordinary advertising piece of history. I finished reading it and vowed to drink more milk, though I don’t even like the stuff. I captured a few photos from my cramped position, too near the diorama, and headed back outside. 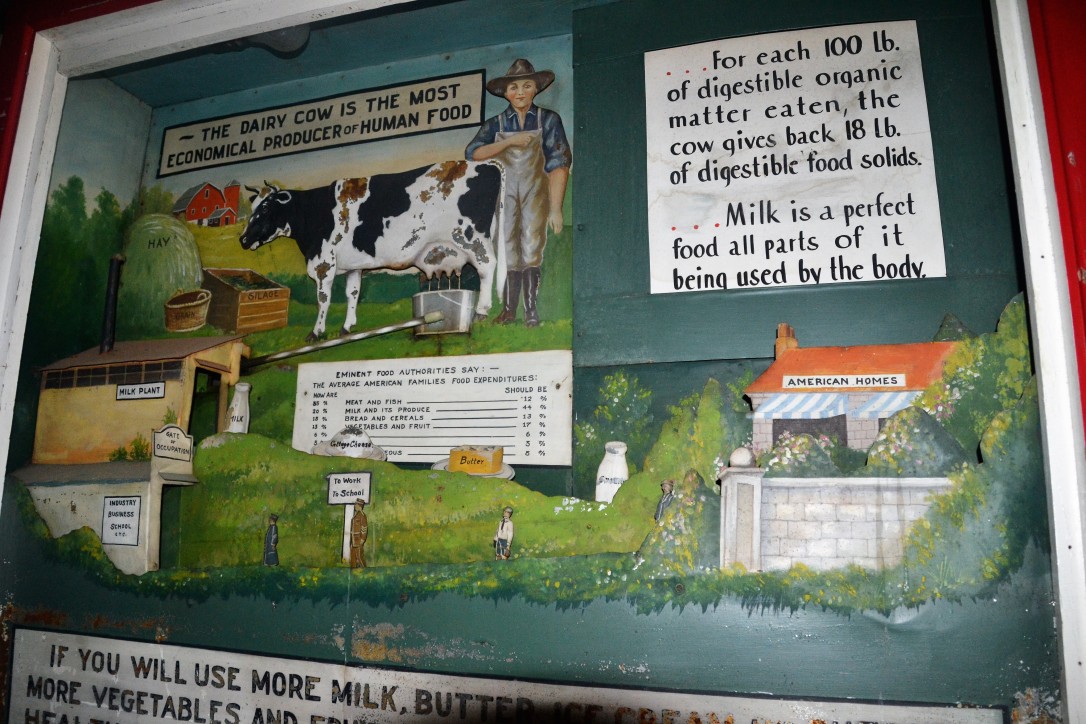 Bright light and fresh air accompanied me through the aisles of tools and horseshoes, and axes and insulators and bowling balls, and sinks and lockers, railroad spikes, and the rusty patinas photographers love. Jon couldn’t reach his daughter to gauge interest in the 2′ fire nozzle so he returned to the black truck, shot off a few pictures and texted her. She was at work, so no reply. 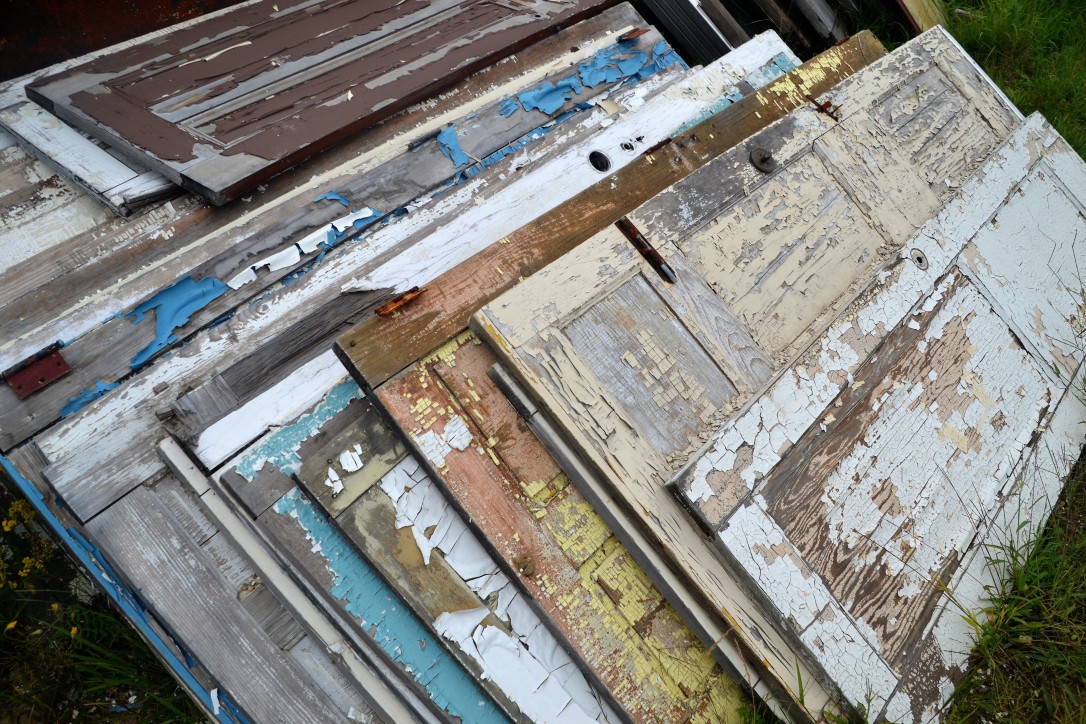 We left Pete’s Place probably more than an hour after we arrived and headed home vowing to come back. Secretly we hoped his daughter would give the approval to pick up the nozzle and get us back sooner rather than later. It is a beauty, and Pete and Pete’s Place obviously have more stories to tell.

Pete’s Place, as we were told by other shoppers, is open irregular hours, and by appointment. According to the business cards we took, “Dealers and Pickers are Welcome. Bring Boots, Flashlight & Empty Truck.” Pete’s Place aka Truck Stop Antiques, open Saturday and Sunday after 1pm and all day on Monday. Route 202, 214 Hollis Rd, Hollis Center , ME Cell phone: 207.229.6515 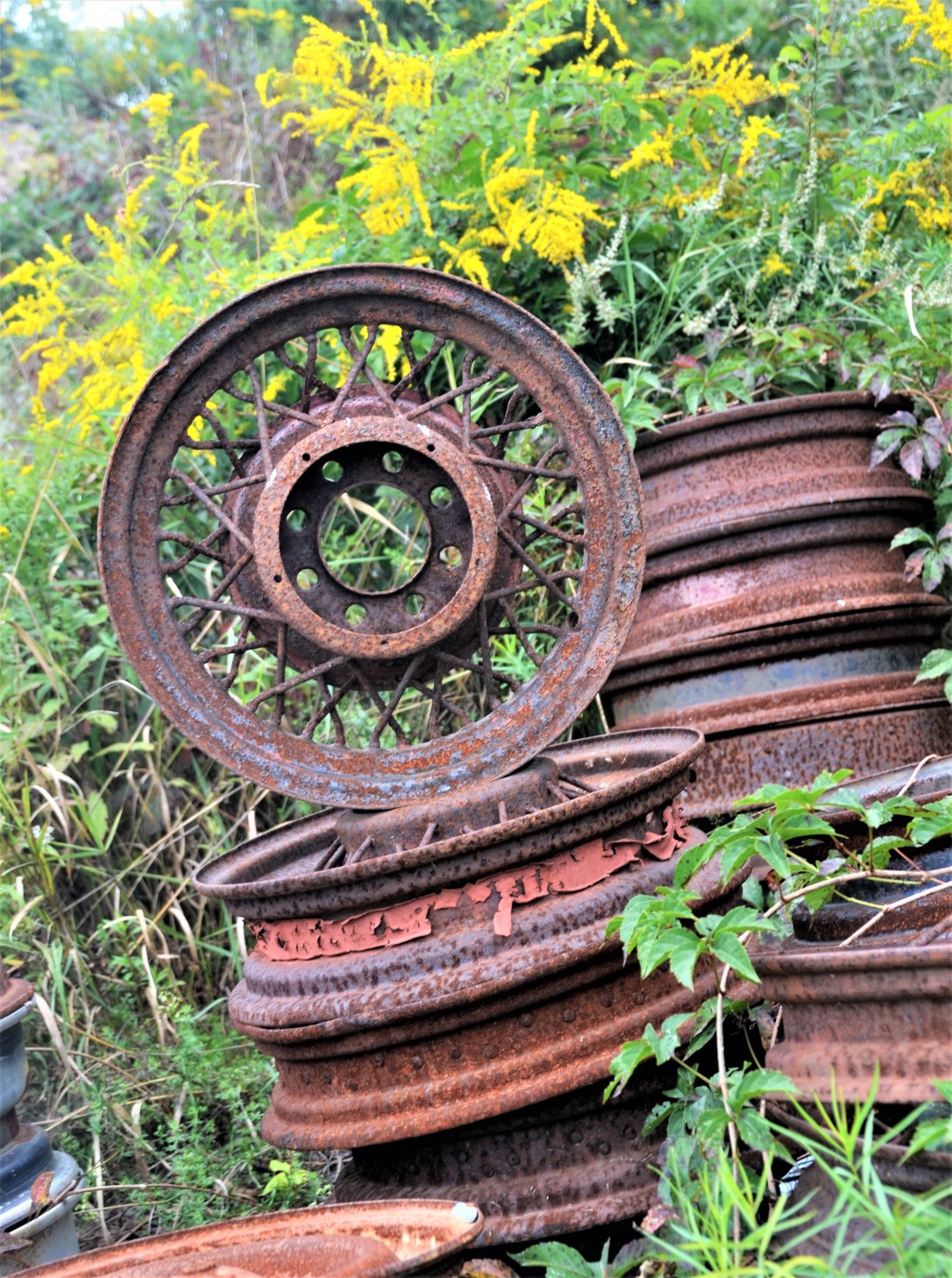