In honor of our twelve years of marriage, I feel very lucky, blessed actually, for having waited so long to choose so well. Throughout my life I pleaded with God for definitive answers to all sorts of questions, this job or that, this house or that, this person or that. And I’d say in my prayers “Please don’t give me any hints or mild nudges in the right direction; I’m not a hints kind of girl. Please, please find a way to come right out and tell me what You want me to do.” Mostly God did His thing His way in His time, despite my personal belief that my way would be easier for both of us.

The one exception was Jon. When Jon asked me to marry him at the Concord Bridge ironically at the place where soon-to-be-Americans fought for independence, Jon and I gave up ours. And it wasn’t one of those squealing so surprised moments you see on all the tv shows and movies. I wasn’t surprised. I felt what I hope he felt – absolute confidence and acceptance of the fact that this was at long last exactly where I was supposed to be and with whom. It felt so matter of fact.  (Cue Etta James’ ubiquitous wedding song ‘At Last’ because I was definitively in my 40s and had never seriously even considered marriage before.)

I was unknowingly waiting for Jon, a guy I kind of met in grade school when I was the School Bus Patrol on our shared daily commute to public education, and he was some shy kid a little older who never spoke to me. Jon moved south in the 10th grade and lived there for 30 +/- years, as I stayed well above the Mason Dixon Line. We reconnected decades later as friends at a multi-year high school reunion. Despite being an upper class man, he helped me via the new flung powers of the internet to locate students from my grade. He was impressive in his ability to help out locate classmates through the vaguest of clues. He was a good albeit distant committee member. Later, after his marriage breathed its last, and he traveled north to visit family, we met again, and there were stirrings of what was to come.

We coasted along as engaged for 2.5 years, happy with that arrangement, until serious illness among our parents encouraged us to speed up the inevitable marriage to be able to share our father/daughter, mother/son dances. We planned a wedding in 2-1/2 weeks of high powered sometimes grouchy tasks and lists.

So 12 years later, amid the Corona virus pandemic that seems to deplete a new joy every day (hugging, singing, dining out, imbibing, theater, movies, concerts, shopping and trying on clothes, visiting friends and family, international travel, traveling across state lines and using public restrooms are all found to be risky and are mostly restricted) I thought it might be good to relive some of the joy, peaks and valleys included, of a happily wedded life.

Inspired by the terminally long song “The 12 Days of Christmas”, I present “Through Our 12 Years of Marriage, My True Love Shared with Me….” I hope our marriage is as long if not longer than the duration of that song.

Through our 12 years of marriage, my true love shared with me…

A love that was always meant to be.

Our wedding at Mosely Woods Newburyport and with our officiant and dear friends Rolan and Leslie. We celebrated out 12th with socially distant, outdoor dining with Rolan and Leslie and a surprise guest (Judy). 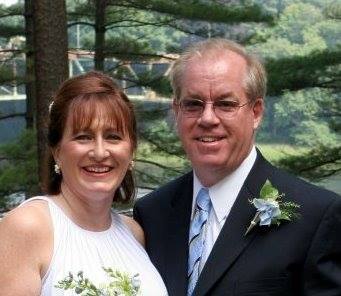 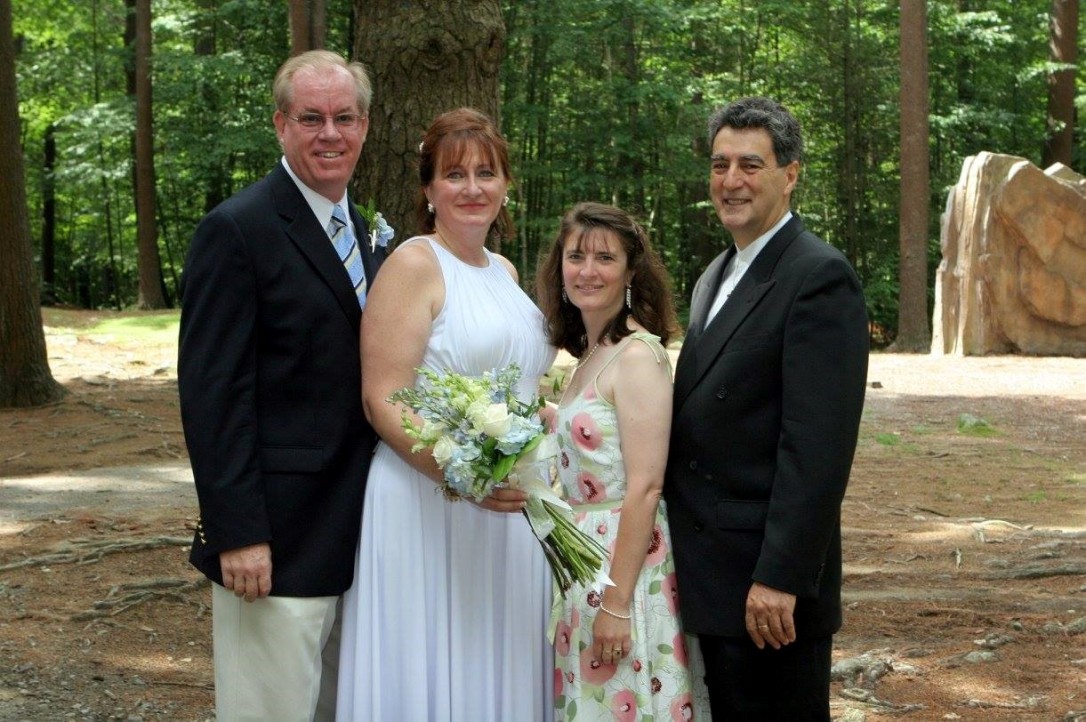 2 Years of Grace. Daughter #2 lived with us as she worked towards and achieved her masters degree. It was a wonderful chance for us all to share ideas, jigsaw puzzles, and weird international foods. This is bubble tea. I don’t like bubble tea. 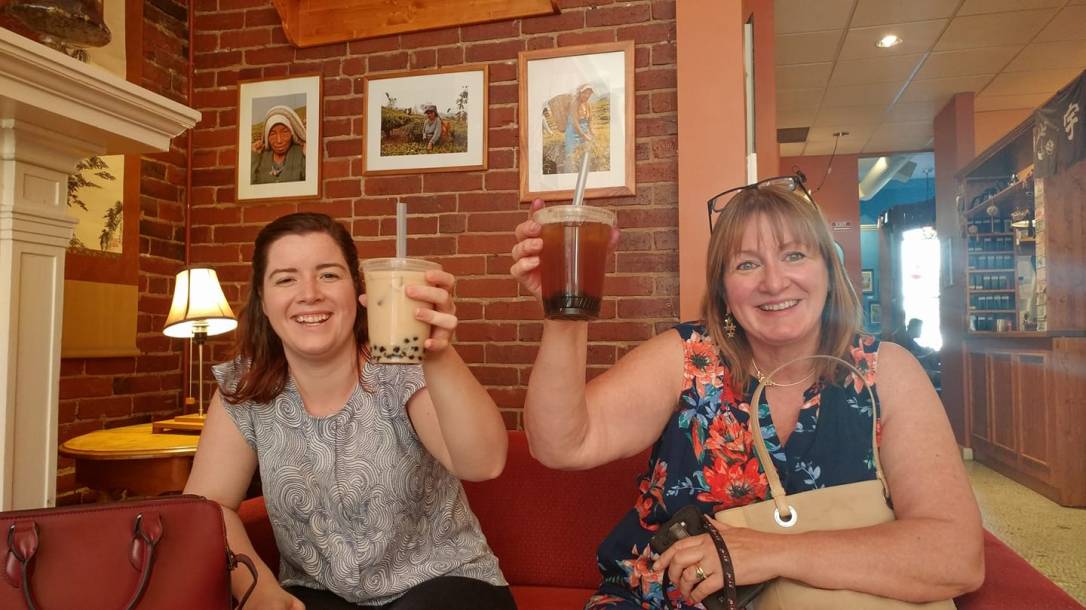 3 Months of Beard Growth. I liked it to look at not as much to kiss! 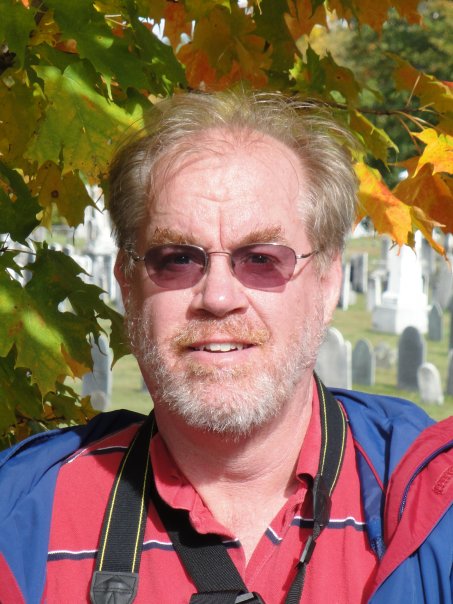 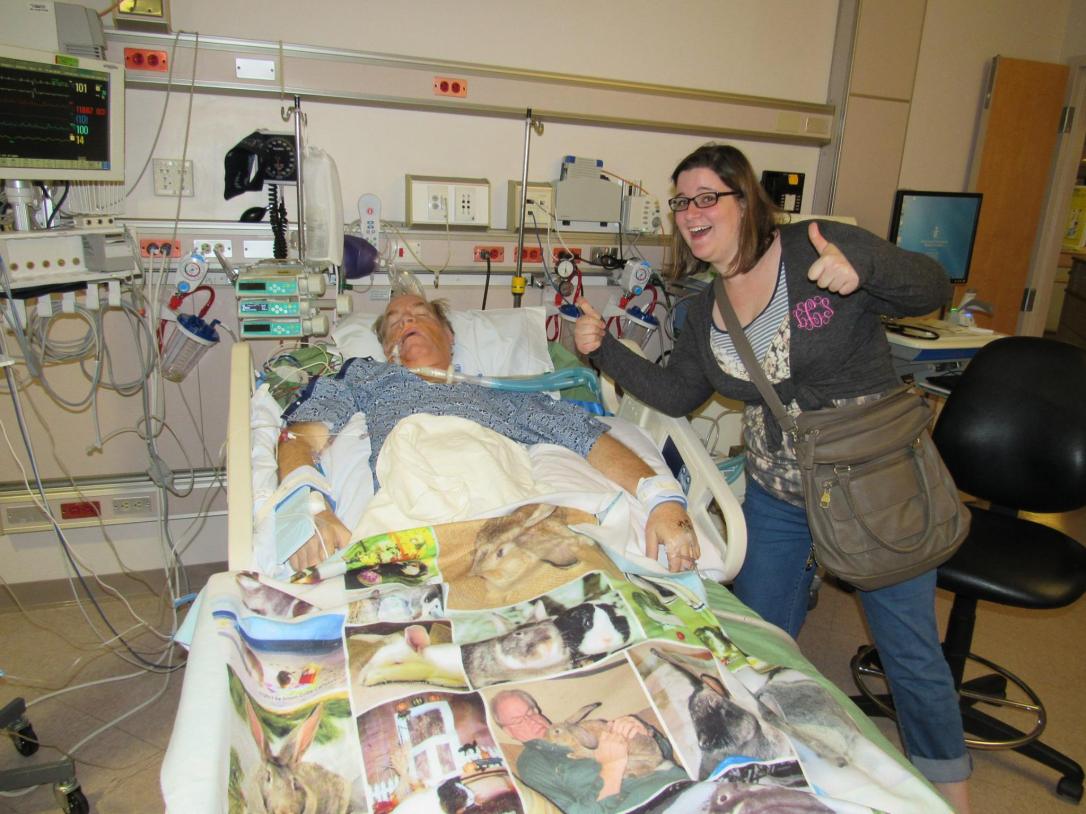 5 Golden Things. There were six but I lost one. 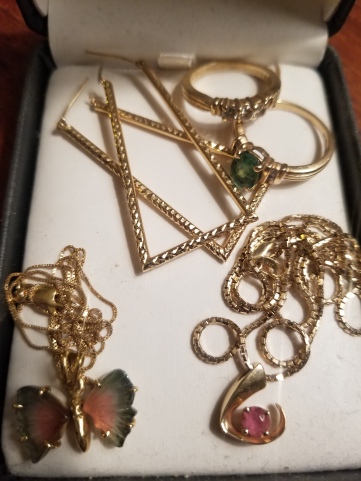 6 Years with Leisa. Leisa moved in just days after our first anniversary and the day following my lay off from an agency job. It all worked out. I started my home-based marketing consulting business that gave me plenty of time to try my hand at parenting. Leisa thrived from 8th grade through year one of college (when she lived with us) and beyond, proving that my inexperience wasn’t going to ruin her. 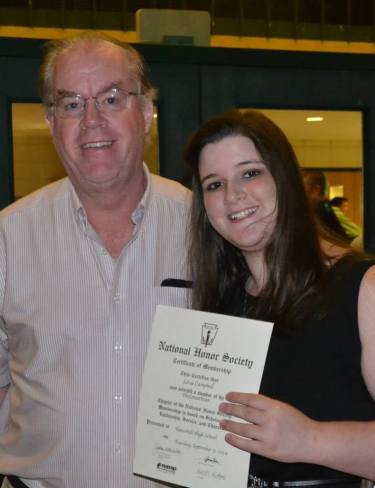 7 Firearms Fired. Last year we earned our concealed weapons certification that started with laser guns and culminated at the firing range with multiple firearms to test. Prior to that was Jon’s birthday trip to the Citadel Fort in Halifax where he got to try out a historic gun.

8 Hard Ciders Sampled. Jon’s Hard Cider birthday tour included Grace and three states. At this location a flight included 8 different samples. I was the designated driver on the return home. 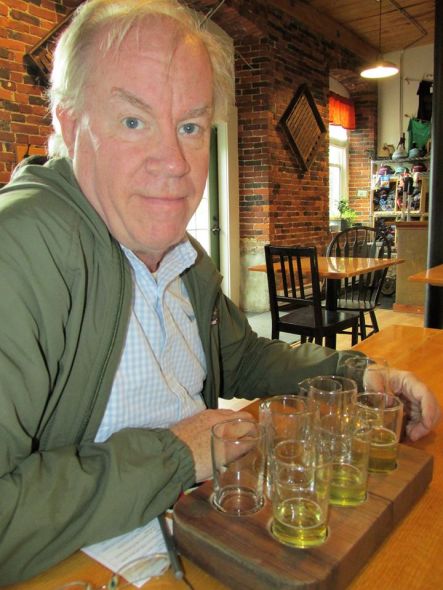 9 Kids and Grandkids. On August 3, 2008 Jon made me a very happy wife, mother, mother-in-law and grandmother all for the first time. And I shared my colorful family with him.

10 Modes of Transport Plus Bonuses. We ARE Planes Trains and Automobiles, etc. .  Airplane ride to Kimball Farm’s ice cream in New Hampshire, hot air balloon ride in New Hampshire, seaplane to dinner at a lodge in Rangley Maine, Cruise Ferry to Nova Scotia, horseback riding in Maine, Peaks Island golf cart, sleigh ride at Belgian Meadows Farm, antique dome car train to Old Orchard Beach, 1929 TriMotor flight out of Lawrence Airport, mountain roller coaster in the Berkshires, Acela train ride to NYC to see To Kill a Mockingbird on Broadway, Gundalow ride on the Merrimack River. And I couldn’t find photos for our fancy bus ride to NYC for our honeymoon, the classic dinner train in New Hampshire, pedal boats in Georgia, or the arduous canoe ride on the Ipswich River topped off by a floating dead beaver, but those would have made my numbers way off. Oh ya and cars, we both have cars.  (UPDATE:  Jon is noting I did not include our schooner rides in Maine, Gloucester, Rockport, New York City, whale watches, Essex River Cruise, Narragansett Bay boat tour, Nantucket Ferry, Casco Bay mail boat tour, incline railway in Chattanooga Tennessee, Grey Line DoubleDecker Bus tour of Manhattan, and he’s evaluating the merits of including the merry-go-round in Central Park. That’s my guy.) 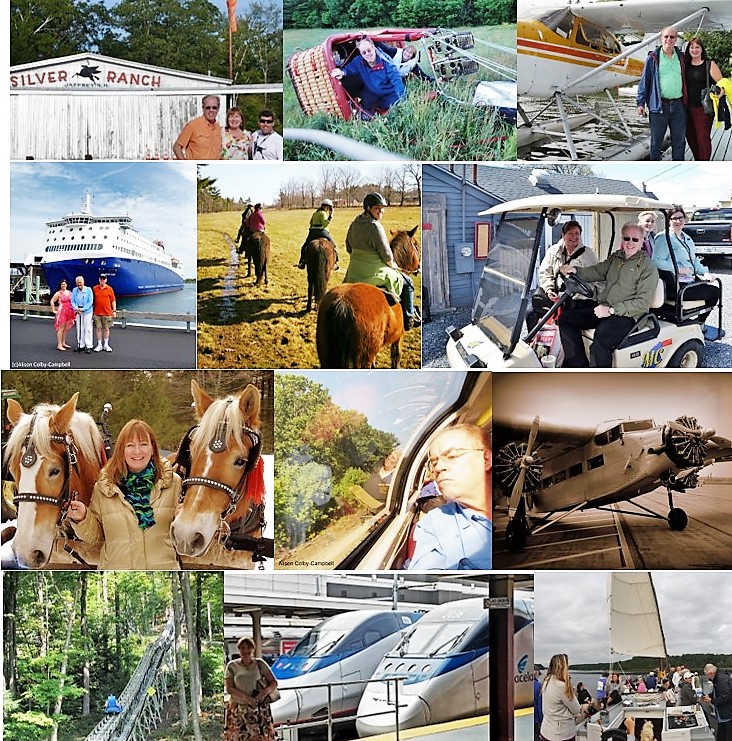 11 Furry Family.  Oh, our hearts were filled and shattered by our loves and losses here. We only knowingly had 11, but soon learned one foster guinea pig was not fat. What a shock to see 3 furry active creatures where just hours before only one had been. I named the babes Betty and Nancy after our mothers. Our only fur fam right now is the curmudgeonly Buzzy. 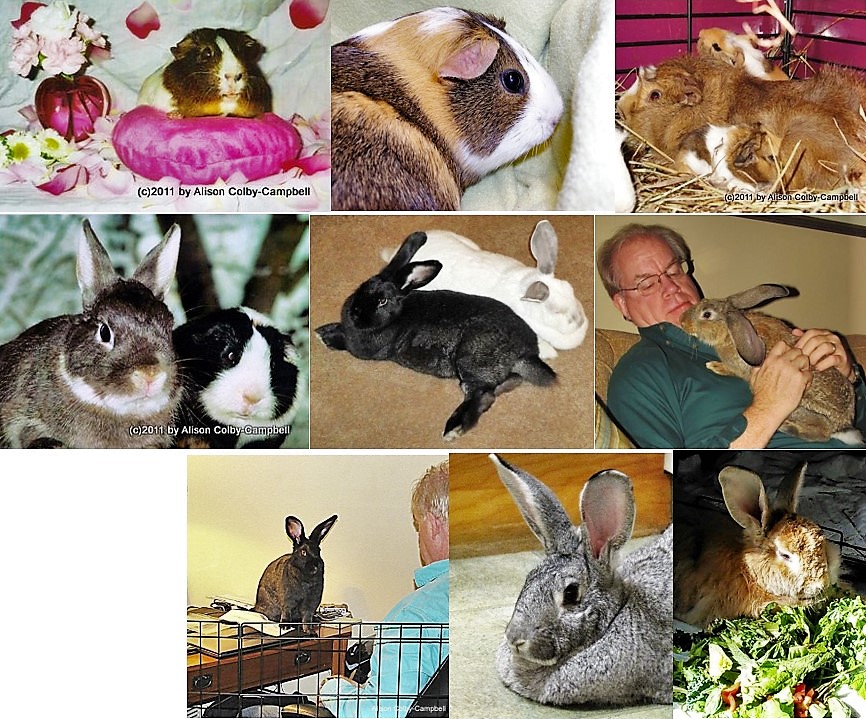 12 Years of Punning. It’s a Campbell thing, and Jon is a master. He is a social media influencer, widely known in pun circles. 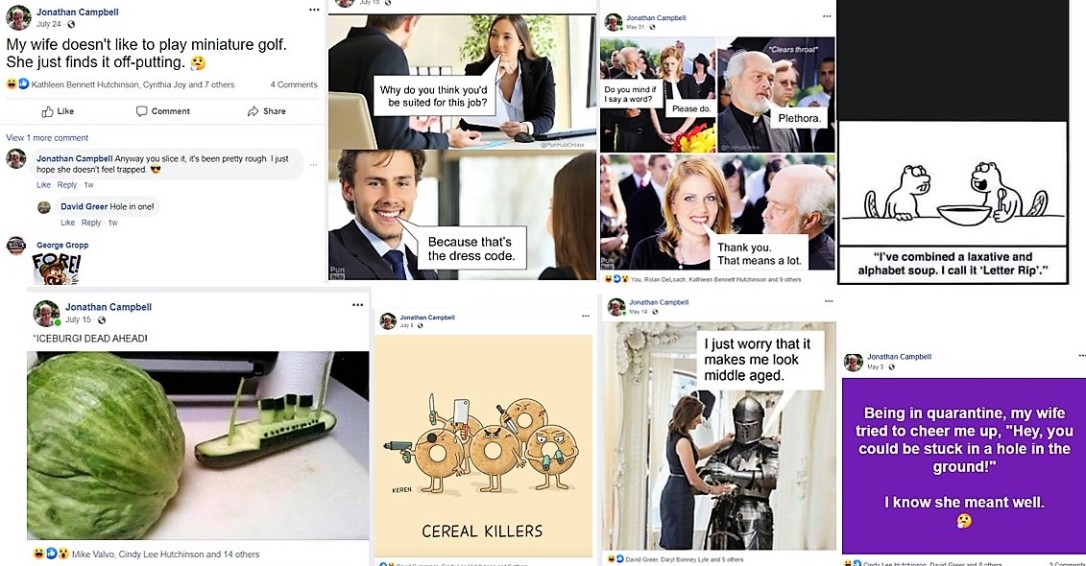 AND A LOVE THAT WAS TRULY MEANT TO BE! 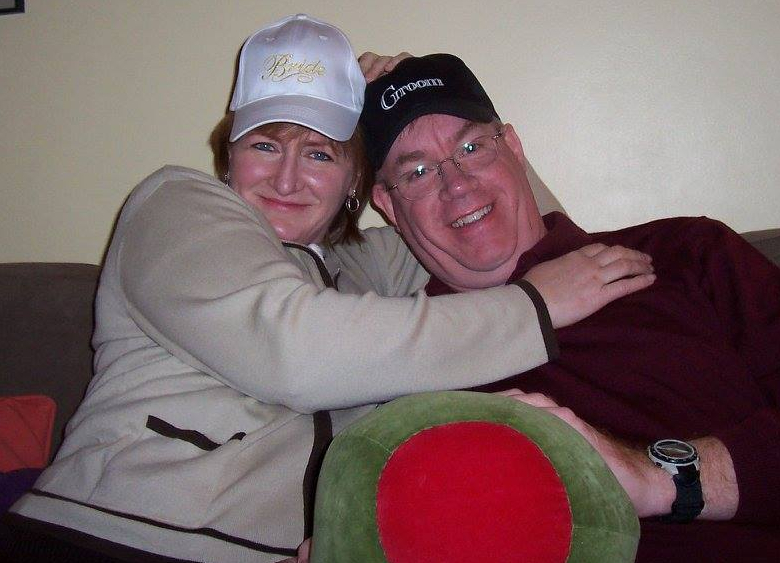 All photos and text (c) by Alison Colby-Campbell