I don’t like long drives that are ugly. I mean get me along the coast or through the woods or mountains, and I’m fine with the distance, but give me an ugly road (Rte 495 and Rte 290) with the likelihood of some ugly traffic (summer, Friday afternoon, rainy, miserable day), and you’re gonna have to do some convincing to get me to go. So my husband read from 25 positive reviews about the collection at the Worcester Art Museum (WAM)  http://www.worcesterart.org/ , then a favorite artist friend said she was envious of our adventure having never been herself, and we noted that admission is  FREE in July and August, so I allowed myself to be convinced.

The drive from Haverhill, Massachusetts to Worcester is visually dismal, especially in the blinding rain that made it too dangerous to play the license plate game and nearly doubled the drive time. But once arrived and brusquely relieved of my umbrella even before having the chance to use the bathroom (did I mention it was a long ride), I started to relax and appreciate this gem of a museum.

The Worcester Art Museum refers to itself as “WAM” and that sounds all superhero-y and friendly, kind of like when the Museum of Fine Arts in Boston shifted to lower cased “mfa” to show how friendly and accessible it became.(BTW I wrote a blog post on the mfa two years ago after the new wing opened http://wp.me/p13Md6-ap .) And so I expected something similar at WAM.

What I got was a great and varied collection – pre Columbian, ancient Roman, Asian, religious, contemporary, portraits, and a combination of known and lesser known artists. Let’s face it, part of the reason I go to art museums is to feel smart. And WAM offered just enough of Monet, Singer Sargent, Gauguin, Cassatt, Copley, Gainsborough, even Warhol, that are so well known, even the untrained mind thinks, “Hey wait a minute, I think I know who did that.” And I smiled at the vast array of knowledge I’ve accumulated without really trying. Despite its depth and broad scope of artists, eras and art mediums, WAM obviously doesn’t exhibit the same quantity of well known works by any single artist as I’d experienced in mfa, so I had to rely much more on knowing styles of the best known artists in the universe and that made me feel pretty good when I was accurate (maybe 60% of the time).

Two special exhibits failed to reach me and neither of them allowed photos. First, the commentary for the 85 photo Garry Winogrand exhibit Women Are Beautiful seemed to try too hard to provide deeper meaning to his snapshots. The teaser to the exhibit asks whether his photography is merely exploiting his female subjects with boob and crotch focus, or whether his documentary style and inventive perspective offers more than titillation. Sounds like WAM is the one trying to titillate. By today’s standards the photos are very tame, but may have been more outrageous in the 1960s and 1970s. The collection does open discussion when it comes to straightening a photo in the editing suite. Crooked may be what some viewers see, but what matters is what they feel and absorb, and askew framing can point the viewer in the desired direction.

And then there was Nancy Spero’s Cri du Coeur (NOT pictured here, no photos allowed). “Completed in 2005 (Cry of the Heart) is Spero’s last monumental work on paper. This work has been described as ‘a passionate cry against war, death, and destruction that is both political and personal, social and metaphysical.'” It was mostly dark and wrapped around the gallery at about knee level. When we entered, the gallery attendant gestured silently to the beginning of the piece. It had a thread I did not immediately recognize.  I don’t deny that Spero’s was trying to make a profound statement, I just didn’t get it from the work. But then again I don’t always get modern art.

Whereas the mfa conveyed the novel-to-me but readily adopted concept that touching and photographing were fine inside an art museum, WAM posted “Do Not Touch” signs everywhere and before entering a guest was provided a map with a harshly hand drawn “X” through the no-photos-allowed galleries.  Only then were we provided with a “WAM” sticker to place on our hand to prove we were recognized patrons. They did offer stools for visiting artists but that was about as interactive as it got. Guests resorted to the hushed tones and reverent behavior that I had just learned to abandon at the mfa. 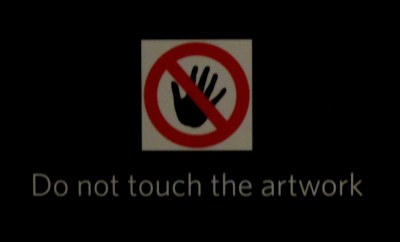 I was not alone in my desire for interactivity. One small child in the company of parents and grandparents whined, “I can’t help it, I just want to touch something” whereby the parents immediately swept her away from the art to the gallery bench and encouraged her to feel the upholstery. Grandma came over shortly to more permanently restrain probing fingers.

Just as I was about to pass the museum off as a pretty awesome collection (it seems to touch on a little bit of EVERYTHING!) that lacked personality I started paying more attention to the written descriptions of the pieces (some of which were hung crooked, as was one painting). Anytime the description was long it was worth a read. And it was there that I began to realize there was FUN to be found in WAM.  They built themselves a museum with some quirky pieces and the museum revels in the quirkiness, as did I.

One sign noted that both artist and subject were morally compromised and so got along with one another, the write up went on to explain that the portrait that was relegated to the attic without bothering to clean up after shifting the arm positions was now on display in this museum with fancy lighting and an expensive frame. Think about that for a minute –  say you’re a writer, maybe of a blog, and something you’re working on really tanks, beyond repair, so you leave it on the computer in the unfinished blog folder, too embarrassing to be seen, and not important enough to be permanently deleted, thinking maybe somewhere down the line it could be fodder for a better piece, and then BAM it’s on display at WAM.

Another described an artist’s early effort where his proportions and perspective were very off, my husband and I just laughed out loud.

Admittedly most of the mistake art was produced by artists so long dead even their relatives can’t be embarrassed for them, and some became flawed with the passage of time allowing mistakes to break through in a process called pentimento.

But the advantage of seeing the discarded work is that we begin to understand the process, the effort that goes into a finished product. Sometimes amateur art viewers like me think “Wow what talent this or that artist has” but these problem paintings show the work that goes into the talent.

I mean that guy with the wacky proportions left me wondering why he didn’t opt for Career Track B. But then I saw “his good stuff” and I wondered what I missed in the early painting that would indicate he was capable of this albeit with a lot of years, training and practice in between.

WAM’s light-hearted side can also be seen in its flyer for a “Gnome Staycation” http://www.worcesterart.org/Events/?id=159029. Human visitors are encouraged to register and drop off their garden gnome friends at the museum’s Stoddard Garden Courtyard for a “much needed vacation. Okay, that’s open minded. But arriving sans gnome left me yearning for the chance to be a participant rather than just a voyeur. Two and a half hours later, as we headed back to the car,  I got what I wished for. A spontaneous, interactive art installment on a lamp post.  I added to its design and left happy.

4 thoughts on “WAM BAM – Welcome to the Worcester Art Museum”