Hurricane Sandy was making the news as the perfect crash of storm forces with the intensity to do a lot of damage. New York and New Jersey were projected to be the hardest hit, and Manhattan was already flooding when my husband and I took our lunch break and cameras to the beaches – Salisbury, MA, Hampton and Rye, NH on October 29, 2012 at about noon, high tide.

At Salisbury, we pushed through the wind using our heads as battering rams, dug boot toes between disappearing wood slats to gain footholds along the path to the shore. We found our people, our people on steroids. Let’s make new friends with them, the couple with the iPad shooting storm surge footage. They’d left their beach side home shortly after a transformer on a wind-snapped utility pole burst into flames. “Good time to head to the beach”, they thought. I snapped their pic; they snapped ours, and the guy proved his mettle by turning his back to the surf for a prolonged photo shoot. I would not do that. I actually wanted to get back to our car, parked as it was between a cluster of three utility poles, less than a block from where the last one snapped. 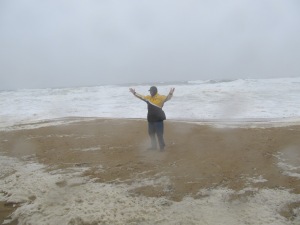 “No one should or will have sympathy for us if we get killed this way”, I said aloud, though the wind may have muffled my words.

Next stop, Hampton Beach. It was tough finding a parking space as so many people raced to the sea. And while I could make out the shrieks by the shapes of open mouths, actual words were blown away in near 60 mph gusts, and the worst wasn’t expected until 9pm-midnight. Were we swept out to sea, no one would ever hear any calls for help. I’d insisted on the bright yellow slicker and the neon orange sweatshirt I thought would make us more visible. But while I glowed in yellow, Jon cast aside his neon orange in favor of a dark blue jacket. He’d never be found in time.

If this were a movie, people would be yelling at the screen, “Don’t go there, don’t be so stupid.”

The drive from Hampton to Rye included patches of road covered with slippery seafoam and enough seaweed to feel it beneath the all-weather tires. Not sure all-weather meant hurricane proof. The seaweed and foam and sea spray and waves breached retaining walls. More crowded parking lots, more silent shrieks, or wide eyed stares at the intensity of nature on a very bad hair day. Growing acknowledgment that we were idiots doing exactly what we shouldn’t. The gnawing realization that someone else’s life could be at risk were we to meet with an entirely avoidable disaster took a gash out of the frivolity of our foolhardy adventure especially when I saw an ocean rescue team member in his bright red jacket, looking into the surf.

Amazing as the scenes were, our photographs are not. There was no way to capture the perspective, no way to protect our lenses and ourselves from fast moving mist coming in every direction. I tried shooting photos from the relative safety of our car until an assault of sea spray shot through the window, behind my glasses and viciously slapped my eyeballs with a sharp and lingering sting of sea salt, ironically, the same type of salt preferred at my table for its mildness. My lips began flaking with the harsh drying wind and my husband’s reduced salt diet was counteracted in 10 minutes by the sea as salt forced its way into every uncovered orifice. Home sounded like a good idea.

A few lane changing gusts on the highway and we were home, safe, and just in time for the lights to go dark. Moments later the Bradford Pear tree in our front yard, the source of multi seasonal photographic opportunities tilted with the wind, just a bit at first and I rushed outside to stomp the roots down and weight the earth with heavy planters. The worst was hours away and still gusts tipped the tree more… away from the house, thankfully. The earth cracked and rose, undulating with a tug on the roots brought on by the wind. I loved the tree, the only one that still held leaves and branches heavily laden with berries that provide sustenance for my bird and squirrel friends. I braved the wind and driving rain like Shelby Scott, the local news personality who almost always gets stuck outside to report on the worst possible weather, to shore it up with planks and boxes of rocks.

By 6pm it tilted too far to recover; one major root snapped and it did a slow motion fall to the ground.

This morning the landscaper rejected the possibility, based on finances, of resurrecting the 30’ tree. “It’s a Bradford Pear they don’t last long anyway, and they are relatively cheap.” Cheap?? I think it was priceless. I came to the door to be by its side as the power saw dismembered my arboreal friend and I watched as it was unceremoniously chucked in the back of the truck.

I can promise to rebuild, but the townhouse managers will probably give me a twig-like sapling that I will need to learn to love, rather than this glorious tree that earned my admiration with its fabulous shows every spring and fall, its generosity in feeding and sheltering wild life (the first place I see, “sniff” saw, migratory robins every spring), and the privacy and shade it afforded my home. Good night sweet tree. Thank you for falling away from the house and cars.

We are very lucky, and we know it.

UPDATE: In my efforts to replace the beautiful though surprisingly stinky (this year most notably) tree, I’ve learned they are just about the most contentious plant for myriad reasons including everything from weak crotches to invasive suckers, and yes, the smell when in bloom is reminiscent of decaying fish.   However, living as I do in Bradford, I can’t imagine  a nicer, more glorious looking, and appropriate neighbor than this tree.  I know it isn’t nice to speak ill of the deceased, but not everyone feels this way; and here is a differing point of view. http://thedailysouth.southernliving.com/2011/02/28/i-just-hate-bradford-pear/